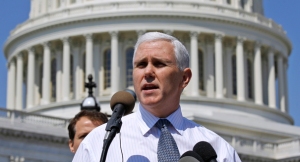 Indiana lawmakers on Monday appeared split over how to respond to the growing backlash against a recently signed religious freedom measure that critics warn will encourage discrimination against the LGBT community.

Republican and Democratic leaders presented conflicting analyses Monday morning over what Senate Bill 101 might actually do, along with conflicting plans on how to make sure that this measure would not allow for discrimination.

Republican Governor Mike Pence signed into law a controversial religious freedom bill last Thursday, despite opponents’ warnings that the measure would ultimately damage Indiana’s economy and reputation. Senate Bill 101, also known as the Religious Freedom Restoration Act (RFRA), is designed to protect people’s religious beliefs from unnecessary government intrusion. But opponents say that the measure serves as a license to discriminate, especially against the LGBT community, on religious grounds.

But Pence remains defiant and defended his decision to sign the RFRA into law last week, saying the measure was “about protecting the religious liberty of people of faith and families of faith.” Republican lawmakers Long and Bosma also supported the governor’s position but said additional legislative language was needed to clarify the “misconception” that the RFRA allows for the denial of service on religious grounds. “We’ve got some work to do,” Bosma indicated, although it may not likely be soon because it’s too close to the end of the legislative session.

Currently, there are discrimination laws in the workplace with regards to employment, pay, and job safety. These are contained in the Indiana & Federal Employment Regulations Poster produced by All in One Poster Company.